A few months ago I came across a fabulous book entitled ‘Brum Pub a drinkers guide by Fred Pearce’. The book was brought to my attention when someone pointed out that the Gunmakers Arms was in it. I couldn’t resist buying the book! 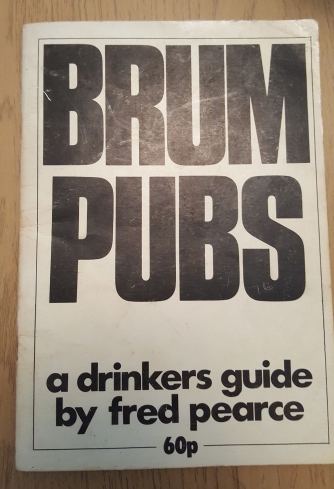 The book was written in 1976 and although only thirty eight page long it covers over 260 of Birmingham’s pubs from 1976. Fred Pearce visited, and wrote about, every pub that was inside the Middleway (the Inner Ring Road), as well as many pubs on Birmingham’s arterial roads and in its suburbs. The book is sectioned into the different areas Fred had visited. 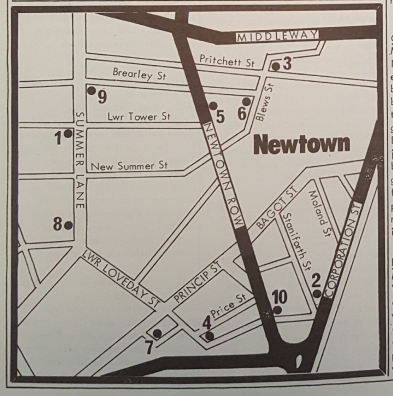 In this book the Gunmakers is included in the section on Newtown. Fred wrote about 10 pubs in this area; the Barrel, Ben Johnson, Bulls Heads (Blews St), Bulls Head (Price St), Clements Arms, Globe, Gunmakers Arms, Royal George, Stags Head and the Turks Head. I’ve included some images of the text Fred wrote about each of these pubs

Having worked in Newtown and Aston for around 30 years I have visited these all of these pubs on many occasions. Nonetheless after finding this book I decided that I’d visit them all of one evening last month to see what had changed in the 41 years since the book had been written. Here’s what I found …

The Barrel (Summer Lane) is a lovely looking building and the exterior still appears much same as it would have done in 1976, but it is now called ‘The Barrel Bar And Grill’. It is (now) a large, one roomed, open plan pub and restaurant which specialises in Indian barbecued food cooked over charcoal. You can can still make out where the separate bar and lounge would have been when Fred would have visited. At the time of my visit there was no real ale on offer.

The Barrel Bar and Grill

The Ben Johnson (Corporation St) has been closed for several years, however a few years ago a sign indicating its sale appeared but nothing else happened. Unfortunately a few months ago I noticed that the cellar fittings had been removed and left outside the pub. I think this indicates it will soon be changing it’s use from a pub into apartments. The handsomely decorated exterior, which indicates its history as a public house, is unlikely to be removed as it forms part of the fabric of the building.  The Bulls Heads (Blews St) has also been closed for a long time and the building is in a good state of repair. There is little signage outside indicating it’s previous or current use and its no longer really recognisable as a pub. It’s highly likely that the interior pub decor has been removed.

The Ben Johnson (left) and the Bull Head, Blews St

The Bulls Head (Price St) is the Gunmakers Arms closest (public house) neighbour. It looks very much like it would have done in 1976 and still has the accommodation above which Fred had noted on his visit. This multi-roomed pub serve serves food daily (closed on Sunday’s) and they have up to four real ales on offer. It has strong links to the Gun Quarter and the pub dates back to the early 1820’s. There is a large car park to one side, which is where some of the local dereliction which Fred mentioned may have been. The Clements Arms (Newtown Row) is also still open and has the same arrangement of rooms as it would have had in 1976. The bar is located at the front of the pub with the lounge at the rear, accessed via either of two corridors either side of the bar. It’s still has it’s busier lunchtime trade with a quieter evening regulars trade. The pub does not offer any real ale. 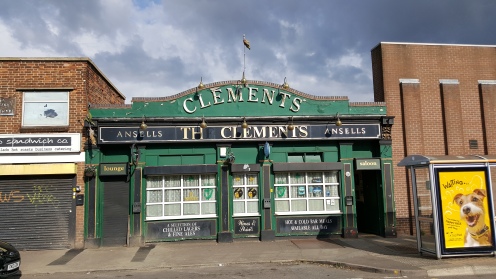 The Bulls Head, Price St (left) and the Clements Arms

Unfortunately the Globe, Royal George, Stags Head and Turks Head are all closed. It is nice to see that The Globe and the Royal George are both in a good state of repair. The former is currently being converted into apartments and the latter is an office building. Most of the ‘public house’ type of exterior features have been removed from both buildings but they still maintain a pub like appearance. The Stags Head retains many of it’s exterior pub features but is looking rather run down and there are no obvious signs of it usage or what the interior may be like. The Turks Head is now a pizza shop and sadly the pub’s large exterior decoration, of a man wearing a Turban, which Fred would have seen has been replaced with a large glass frontage. The pubs exterior has changed so much you would never guess it’s former life as a pub. 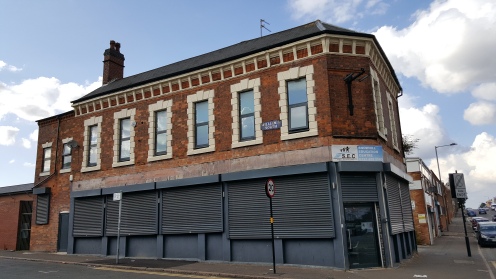 The Globe (left) and Royal George 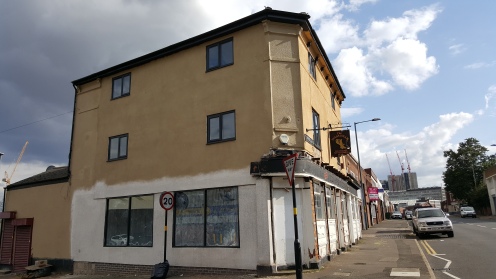 So only four out of the ten pub Fred visited in this area are still open. I have, of course, saved the best until last – The Gunmakers Arms. The pub retains the same exterior appearance that Fred would have seen but the interior has changed a great deal since 1976. We recently refurbished the pub and combined the two front bars into one larger room. We’ve also opened up the corner door which had been closed since the Eighties and the Two Towers brewery is now located to the rear of the pub across the courtyard. We now have ten real ales on offer and food every day except Sunday. 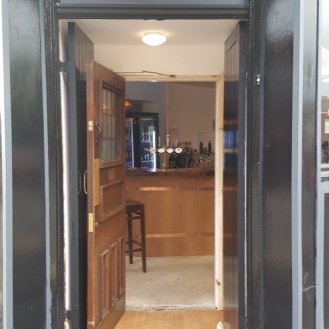 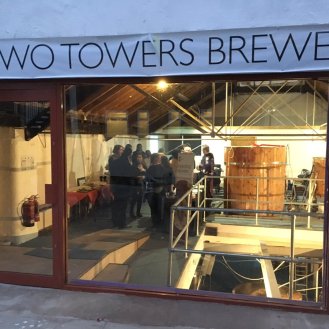 We are, as Fred said, still a ‘nice little pub‘ with a ‘nice barmaid’. I really enjoyed reading Fred’s closing comments about the pub: ‘Oh, and it’s extremely friendly’. This is still true, so please come and find out for yourself just how friendly the pub is.